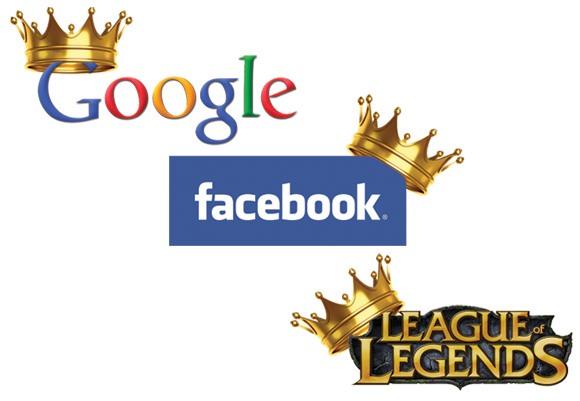 Currently three of the internet’s biggest names – Google, Facebook and League of Legends. What does the king of Search Engines, Social Media and Online Video Games have in common? What can we learn from these ridiculously successful businesses? 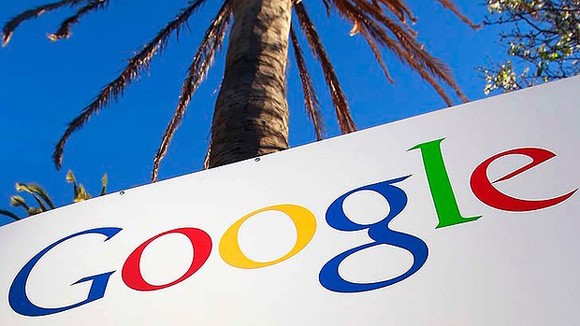 Google has become a household name for most of the developed world, the recent search engine market share statistics do not lie.  Whether you’re “Google-ing” for a product, a service, recipe, fun fact, song lyrics… etc., the first page of Google is prime real estate since it averages over a billion searches per day. Even if we omit the fact that Google owns YouTube, Gmail and other popular free services, there is no denying that Google is the king of search engines. 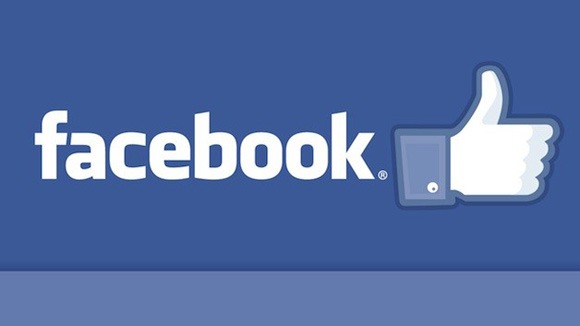 With 845 million active users (source: the social skinny), Facebook has led the charge for social media and is largely responsible for the increasing internet social trend on the web. To put the statistic into perspective, Twitter has less than half the amount of users compared to Facebook. 500 million people people log onto Facebook daily, representing a 48% increase from 2010 to 2011 – I can only imagine how much higher it is now.

Riot Games’ League of Legends is the youngest of the three names here and some may disagree with me crowning it the current king of online computer games, but the numbers do not lie. Blizzard’s World of Warcraft had 12 million subscribers at its peak; League of Legends has 32 million active players monthly. At its most popular, Activision’s Call of Duty: Modern Warfare 3 had 3.3 million daily players. League of Legends has 12 million. (source: Forbes 2012)

Surprisingly although each of them are innovators in their own right, all three of these internet giants cannot claim to be the first and the original. 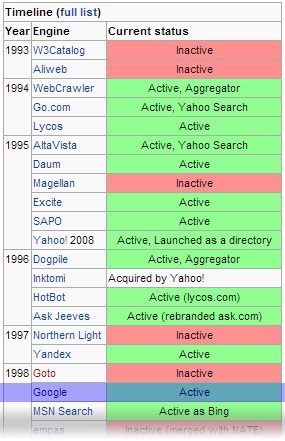 Google has been around officially since 1998, but web search engines date back to 1993 with names like Lycos, AltaVista, Excite and many more. 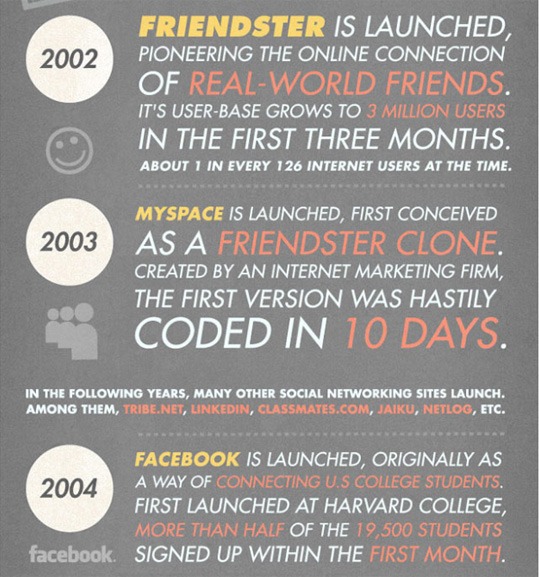 From Mashable’s social media history infographic, sixdegrees.com allowed profile creating and listing friends in 1997 quite a long time before Facebook’s conception in 2004. And some of you may remember Friendster, which had many of Facebook’s current features. 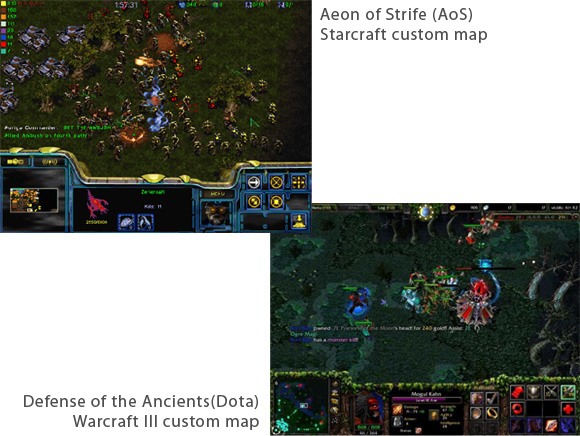 The specific computer game genre that League of Legends falls under is Multiplayer Online Battle Arena (MOBA), despite coining the term itself the genre traces roots to Aeon of Strife (AoS) and Defense of the Ancients (DotA) which were custom user created maps for other online games.

Innovation doesn’t necessarily mean something original at all, but the act of innovating; introduction of new things or methods. Here are some of the many innovations that have contributed to each of the big three’s success. Around 2000, Google rose to search engine prominence mainly due to delivering better search results for majority of searches with an innovation called PageRank Voted by Fast Company as the #1 most innovative company in 2010, the wall, news feed and likes are only a few of the now familiar features that were brought together for the first time by Facebook. 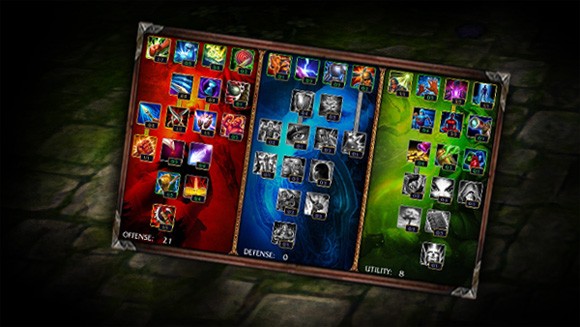 League of Legends is the first game to combine the MOBA genre with player progression through obtaining levels via experience points as well as mechanics such as character customizations (Runes and Masteries). 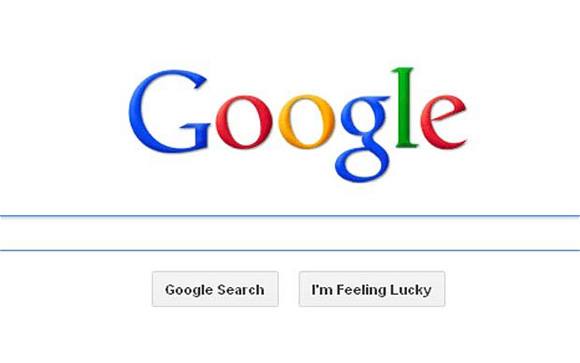 Google has always maintained a minimalist interface to its search engine, the practically blank white page that we all have come to love. It was in contrast to many of its competitors who embedded a search engine in a web portal. 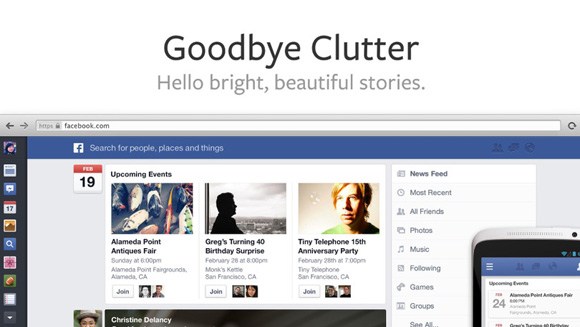 Facebook’s ease of use, simplicity and easily-accessed features are undoubtedly pillars of its success. Facebook’s biggest competitor (during 2006-2008) was MySpace that was music and video feature filled environment which was much “fancier”. 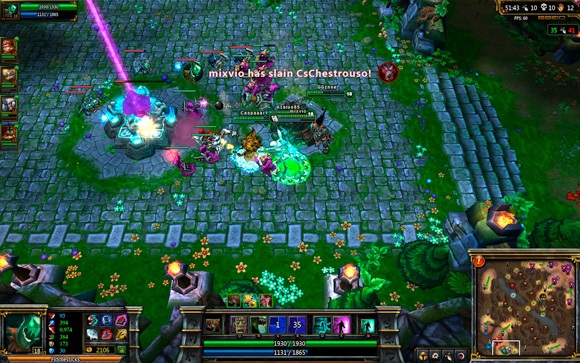 To the non computer gamers out there League of Legends maybe difficult to understand. But when measured against its major competition in the genre – DotA2 or Heroes of Newearth, the game is definitely easier to pick up for new players with straight forward mechanics and an intuitive interface.

The target audience required to attract millions or billions of users is obviously a very wide target audience. However, we mustn’t forget that all kings three had to start from zero once upon a time, like any other business. 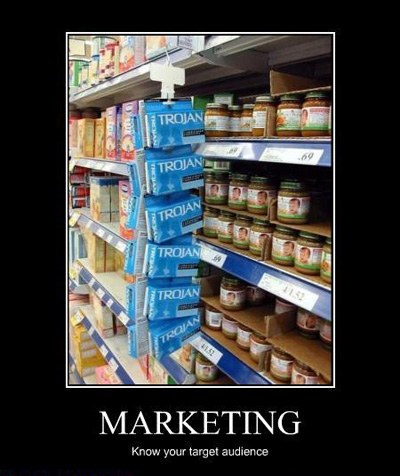 Whilst Google has always had search engine users as their target audience, perhaps they did not start with the intention to “take over the internet”. Facebook launched in 2004 as a Harvard-only service and remained a campus only site for two full years before finally being available to the public in 2006. And League of Legends’ appeal was obviously initially to the MOBA and RTS genre gamers, it has undoubtedly expanded into the play schedules of many more video gamers.

Google’s mission is to organize the world’s information and make it universally accessible and useful. Facebook’s mission is to make the world more open and connected. Riot Games aspires to be the most player-focused game company in the world with their only title League of Legends. Some may view these mission statements as broad and “too airy fairy” and some may even criticize the three organisations for adhering poorly to their mission statement. No matter how much we debate, the fact is that these are successful businesses that have currently accomplished what they set out to do and not simply “just make money”.

“The best things in life are FREE”,  including Google, Facebook and League of Legends. It is obvious that free products and services have an inherently lower barrier to entry for consumers, which I believe plays a big part in their success. Majority of Google and Facebook’s revenue come from advertising, whilst League of Legends is based on non-compulsory micro transactions from players. The bottom line is the user can use all three at no cost at all, with little to no detriment to their user experience.   We are big fans of Google, Facebook and League of Legends. What do you think makes them so successful?